Some say bitcoin acts more as digital gold then as a currency, more as a store of value than as a medium of exchange. It is very interesting to look at the various bitcoin forks with this question in mind.

Now bitcoin is from its beginning more like gold in the sense that it is an asset with limited, predetermined supply. Dollars and other fiat currencies are debt-based since they come into existence when new loans are made, and their continual supply growth is rather assured; usually inflation occurs to varying degrees. See the Money 3.0 article for a longer discussion of this point.

There are 4 versions of bitcoin, 3 currently, and one possible fork. That was scheduled later this month as Bitcoin 2x (or B2X) a possible fork due to partial adoption of Segwit 2x, but it has now been indefinitely postponed due to lack of support.

As of today, approximate values for the 3 existing forks are:

And Bitcoin 2x B2X had future values around $1600 before plunging on the announcement that it is now postponed.

All these cryptocurrencies have a supply of around 16.6 million accounting units, and all are limited to 21 million as the ultimate supply. And yet their prices are very different. Bitcoin has a first mover advantage but is that the whole story? How does one value BCH and BTG relative to BTC? In principle the various versions have both asset and currency characteristics.

Each of the alternatives to the original bitcoin is designed to facilitate faster, less expensive transactions. And this makes it more like a currency than a reserve asset.

BTC can be looked at like a large denomination bill, not as easily spent, although it is much easier to break into change than large bills are. Bitcoin Cash differs from BTC because it has a much larger blocksize, 8 MB. Bitcoin Gold differs in adopting a GPU-friendly mining algorithm, Equihash, rather than SHA-256 used by the others, which requires custom ASICs.

Each of these three alternative coins is designed so that the system can process transactions more quickly and at lower cost, and so, along the spectrum of digital gold to currency, each is closer to a currency than the original BTC.

And that, somewhat counter-intuitively, is why original BTC retains a higher value.

In particular, the Bitcoin Gold is actually least like gold of all of these, since it will have the most accessible and thus fastest mining algorithm, and presumably could end up with the lowest transaction fees. 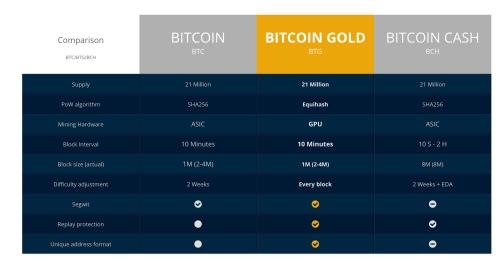 The respective values of the 3 or 4 types of bitcoin reflect this view. Bitcoin is the “slowest” and has the lowest velocity (slowest turnover) and highest value. Bitcoin Gold appears to be the most rapid and with lowest transaction fees, and thus has the lowest value.

Bitcoin Cash and a possible future Bitcoin 2x are between the two extremes. Since Bitcoin Cash has much larger blocks it has substantial miner support. Bitcoin 2x is favored by the user community that wants to facilitate more efficient transactions.

If you have a gold coin and some fiat currency, which do you spend first? You bought the gold coin in expectation that it would preserve its value and increase in terms of the number of currency units per coin.

So HODL (hold on for dear life) BTC, and spend or convert BTG and BCH seems the way to go for now. As always one should monitor how the different cryptocurrencies are developing in comparison to each other, in this very dynamic and volatile marketplace.